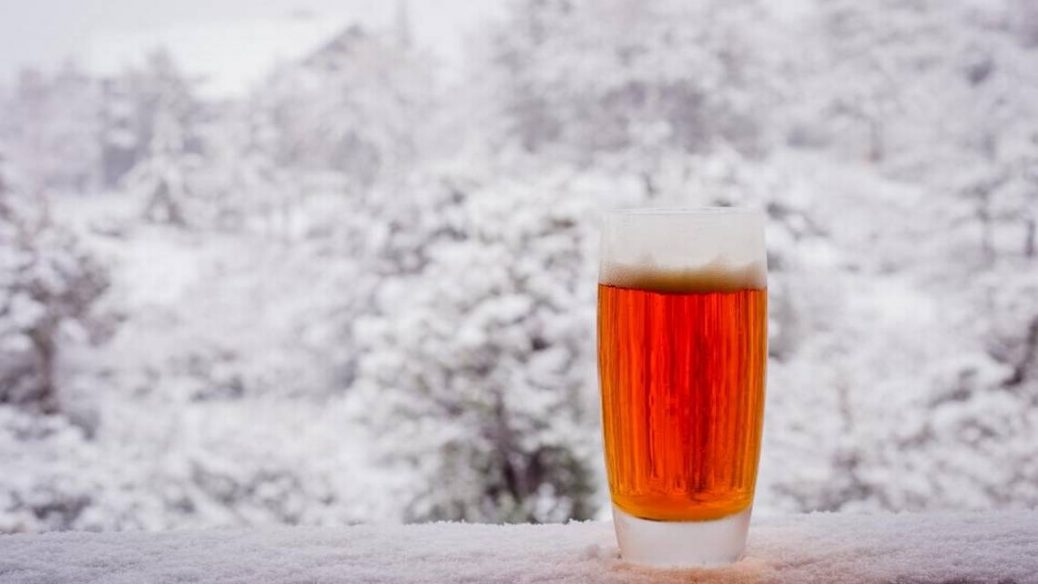 John Bloom travels the country working for Big Image Systems, and along the way, he loves to meet working theatre artists to learn more about our unique field.  He shares his stories online at Big Image Theatre Network, and we are happy to share one of his adventures here:

I know, that’s exactly how I start many of my how-to articles. As far as I’m concerned, this is a how-to as in, “I would really like to know HOW TO do that thing that I suck at.” And when BITN visited the Guild and our conversation drifted to painting with beer, I knew that I had our next how-to topic. Angelique Powers, a co-founder of the Guild of Scenic Artists, was more than happy to fill in the many blanks. The result is this COOL how-to! 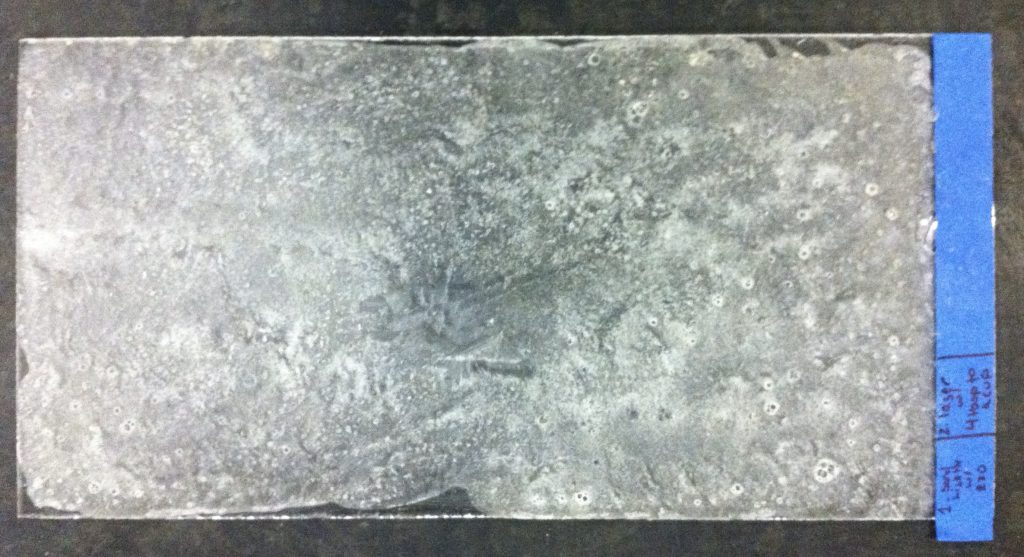 This how-to is going to talk about the scenic technique of using beer and Epsom salt to create super-realistic ice and frost on a plexiglass surface. If you’re an old scenic dog, then you may know this trick.  But if you’re new to the business or if you’re doing Scenic Art for a high school production, a display window, or trying to add a little winter magic to your holiday event or environment, this technique is cheap, easy, and the results are amazing.

A Brief Word on Binders

In the art world, a binder is defined as “A liquid component of paint that solidifies as it dries and thereby serves to bind the pigment particles and develop adhesion to a surface. Also known as a binder.” Any scenic knows that, of course.  And binders are generally one of two types; plant-based such as linseed oil, methylcellulose, extracts, and gums, or protein-based such as egg whites or Casein. Even today’s most advanced scenic paints use one of these two naturally occurring elements as the binding agent in their lines.

But painting is only one part of a Scenic Artists’ job. Another part is taking stuff and making it look like other stuff; MDF to stone, foam to wood, plywood to rough oak. For this part, paints and pigments take a backseat and the binding agents become important all by themselves. It’s the part where a scenic gets to apply both experience and experimentation based on the needs and rigors of the job. 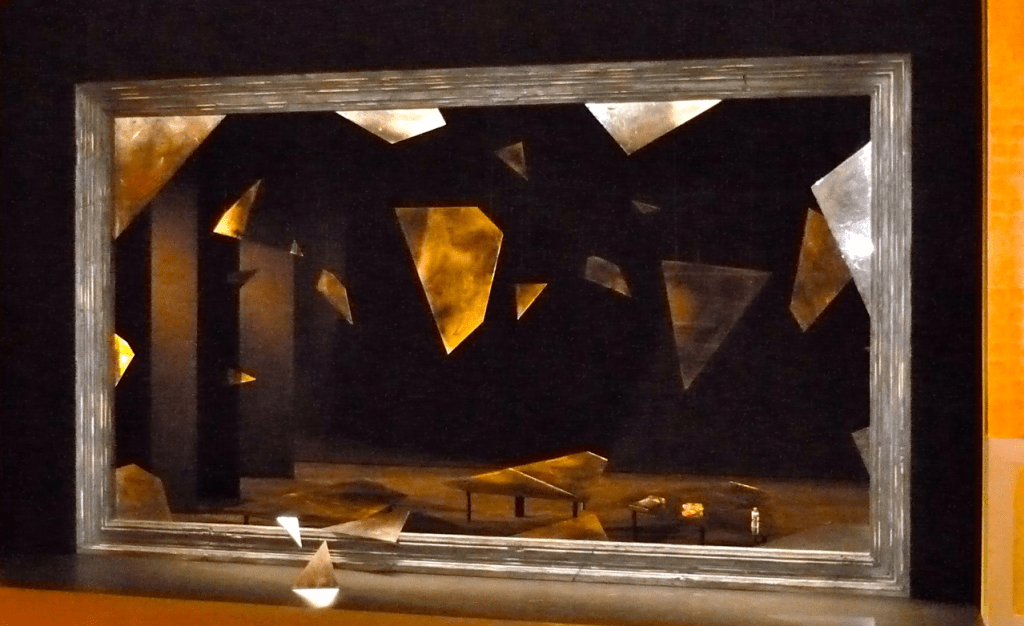 When Angelique Powers was the Scenic Artist for The Abbey Theatre’s American tour of Terminus, one of the effects she had to produce was the effect of ice and frost on burnt glass. This meant solving two interesting problems. First, what to use to create the icy look. And second, how to bind it to plexiglass. To achieve this effect, she relied on a tried and true Scenic Artist secret ingredient; Epsom salt.

“It’s all about the shape and size of the salt crystals before you dissolve them with a liquid. Epsom salt is made with magnesium and is a larger prism shape vs table salt, which is more like a tiny cube. Dissolving salt ruins its original shape and once the water has evaporated, science happens and its left all wonky and stretched out – ie frosty finger shapes!” 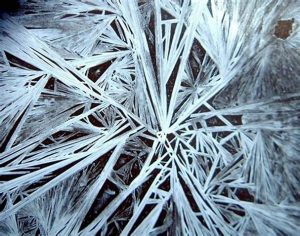 Next was the binder that would hold the salt to the plexiglass.  “Beer makes a good binder because it can hold your medium to the surface but can be washed away with a good scrubbing,” Angelique explained, “Faux Finishers have mixed it with tints and glazes to create faux wood treatments, and Scenic Artists have used it with dry pigments for drops.”

To ensure that the scenic elements held up to heavy traffic and being walked on, Angelique applied her mixture to what would be the underside of the piece. To achieve the look of charred glass, she used a Preval to carefully apply a mix of sealer tinted with black. Carefully stippling the wet paint with a chip brush to break up up the color and salt texture helped achieve the sooty burnt effect.

Now it was my turn! Because I had sprung this how-to onto Angelique out of the blue, there wasn’t time to capture photo documentation of the process. So I figured that, if I wanted to show how this works, I had to roll up my sleeves and buy some beer.

(The sacrifices we make in pursuit of knowledge…) 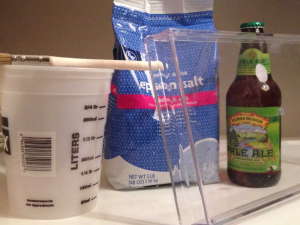 Beer
4 tbsp. of Epsom Salt per one cup of beer.
A mixing container
A whisk
A suitable substrate
Chip brush, (if desired)

Surface area covered; this will vary wildly depending on the ultimate effect you want to achieve. A little goes a long way, depending upon the design requirements. A cup will get you far. 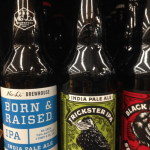 I wanted to know if there was a certain beer that worked better than another, knowing only enough about beer to tell you that there’s a million of them, and they are all different and stuff … A beer snob I am not.

“It’s a dealers choice,” she said, “as in whatever one you want to take a sip of before you mix it.” She told me a lot of Scenics say a lager works best.  She once did a sampler pack– for the sake of art – “I did find that a nice, full-bodied beer (like a Fosters) worked best,  but I have been known to use a Hard Cider” 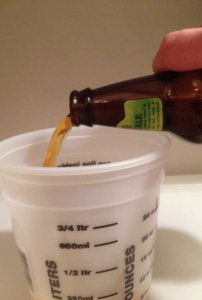 Angelique walked me through the steps.  “You need to prep the beer prior to adding the Epsom salt,” she begins.

Pour your beer into a bucket. “Stir it up really well,” she advises, “so it gets extra foamy.  Then let it sit for an hour. The longer the better,  to really go flat before mixing it with the salt.”

While the beer is going flat, it’s time to prep the surface.  In this case, clear plexiglass.  “If I know the plexi is going to get a lot of traffic, I have might give it a light sand with a 200 grit sandpaper,” she told me, “but most of the time, I just make sure it’s a nice clean, dry surface.”

NOTE – She’s never done this technique with the plexiglass installed and in a vertical position.  It could be done, she says, however, the process would be harder and messier. She recommends laying the Plexiglas flat on paper or dropcloths to make clean up easier. 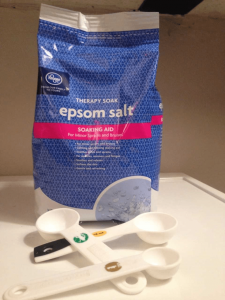 Once the beer has turned flat, it’s time to add the salt and apply the mixture. Knowing what I know about how bars smell at closing time, I asked Angelique if there is an, uh, odor problem.  “After it dries and evaporates, it’s fine,” she says, “It’s during the process that your shop can smell a little like a frat party.”

Ratio –  Start with 4 tablespoons of salt per 1 cup of beer,
“Pour it in and whisk it until the salt dissolves into the beer,” she instructs. “Once again, I’ll let it sit for another 5-10 minutes to flatten out any bubbles, then will give it another quick stir.” Small samples will help tell you if you need more salt.

Viscosity – The mixture should have the consistency of olive oil; it pours and can holiday easily, but it’s slightly heavier than water. 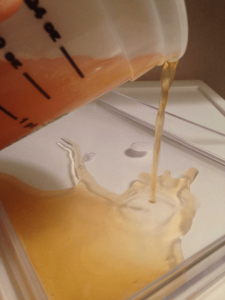 Angelique explains the application. “I’ll start out with a slow, careful pour,” she says. “If I want to control the shape, a simple chip brush can apply and shape the placement. I have also spattered it along the edges to help give it a little bit of a fade.”

I wondered if I had to take more than one pass. “You shouldn’t need two coats. Besides, if you pour a second coat, it’ll simply dissolve the first one. It really comes down to whether to add a little more in one area to get rid of holidays, or using a rag if it’s spread too far and you need to wash some of it away.”

As Angelique explained it, this is a ‘sit and wait’ type of drying process. “Direct fans won’t be your friend on this, it’ll just push your liquid around. This is the type of technique that I like to do at the end of the day, so it can do its science overnight and in the morning I have magic!”

The next day, the results were in!

And the pictures speak for themselves. The beer had evaporated, leaving behind an incredibly realistic crystalline sheet of ice over the plexiglass where the mixture was applied. I wanted to ask Angelique about the effect and how it would hold up. How tough was this stuff? “It will scrape away if you really try, but generally it holds up really well, especially in low-traffic areas,” She explained to me, “Undisturbed, it can stick to the plexi for months or even years before it starts to get weird.”

My own test resulted in some pretty tough stuff. It’s hard to scrape off, (not impossible, it’ll wash off easily), but you don’t need to treat it with too much care if it will be mostly left alone on the set. I was curious as to whether this could or should be sealed. “You shouldn’t need to seal the frosted effect,” Angelique summed up, “but if the scenic piece is going to get a lot of handling, I would suggest thinning a simple clear flat with some water and lightly applying with a Preval type sprayer.  You need to be very careful with this application that you don’t over saturate or it will all dissolve.”

So there you have it.  An amazing scenic technique that can easily and cheaply add a frosty touch to your set, display or live event.  Even I could do it, and like I said…  I suck at Scenic Art.  But now I suck just a little bit less. 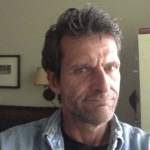 John Bloom: has been addicted to the arts from a very young age. As a wee lad, John was making Super-8 movies, creating monsters and spaceships with his friends, and had the dream of being the next Ray Harryhausen. As he grew, he switched to acting, eventually receiving a BA in Theatre from Allentown College, (Now DeSales University).  After a stint in the acting and corporate world, John returned to his first love as the head of sales of a major Theatrical Company in Queens NY. It was there he was introduced to Big Image Systems and helped to introduce digital printing to Broadway and beyond. You can contact him here.

B.I.T.N and Big Image Systems are Proud Sponsors of the Guild of Scenic Artists, and we encourage you to read more of John’s adventures like this one about creating props for Go, Dog. Go!  and when he interviewed Guild member Brigitte Bechtel.