From Stage to Museum

Home 2017 July From Stage to Museum

From Stage to Museum 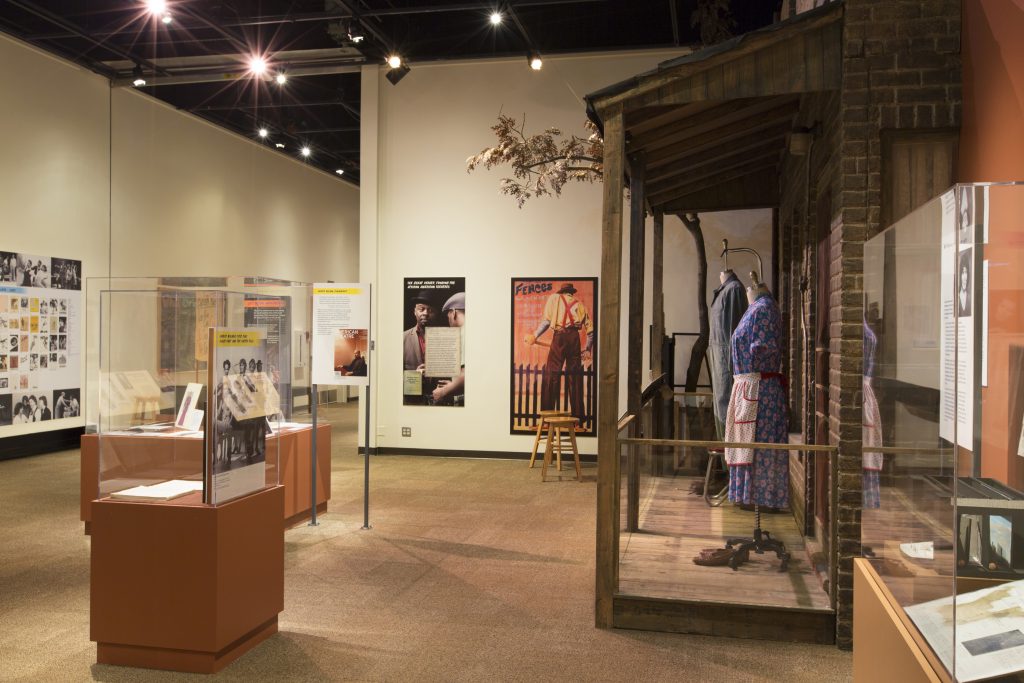 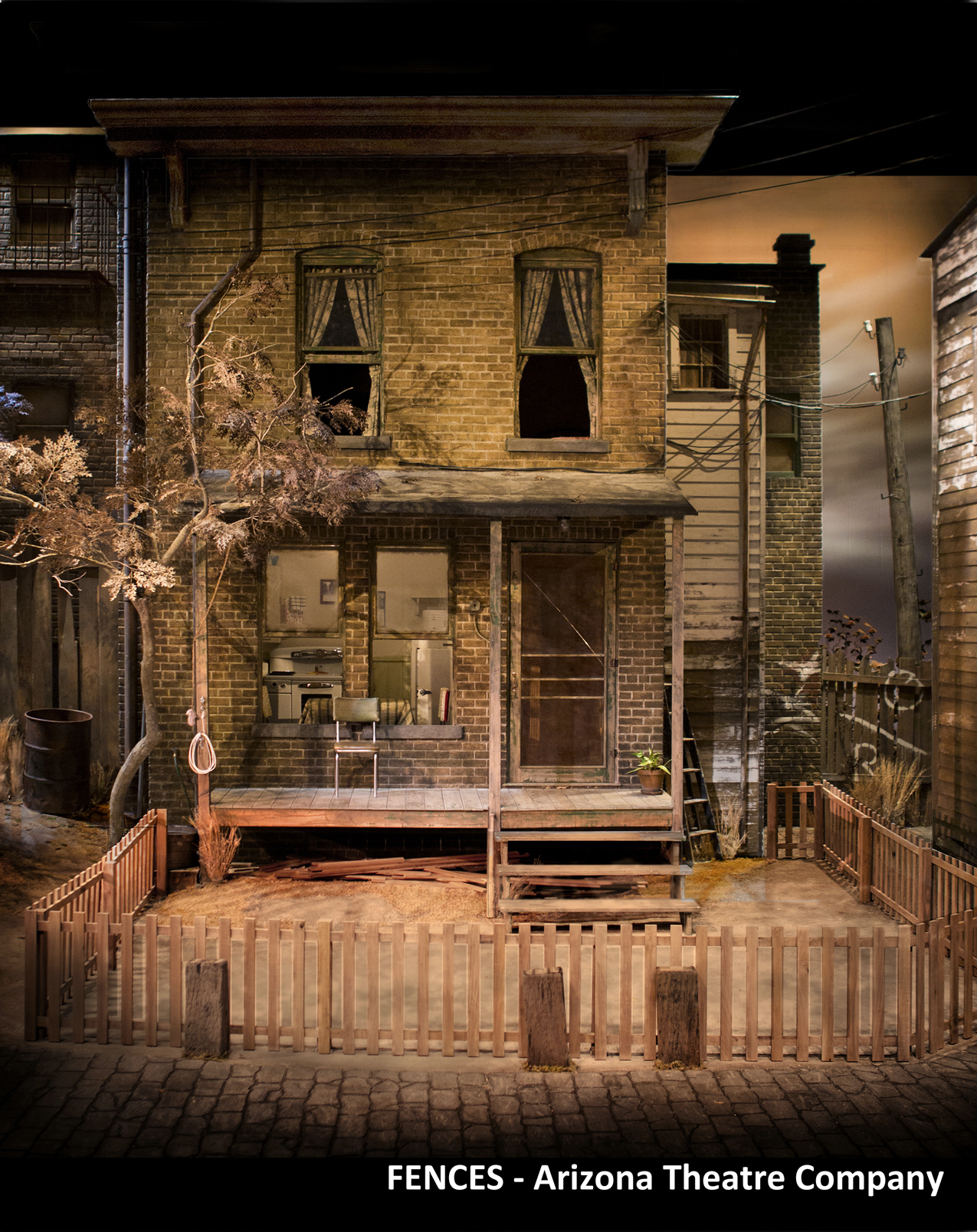 Designed by Vicki Smith, this set hit all the notes of a highly realistic world for the characters and audiences to fall into. In an article originally posted at Stage Directions Magazine, Arizona Theatre Scenic Intern Lydia Lopez shared the crew’s process for creating such a ramshackle world. It is well worth the read. (No seriously, go read it- and then come back!)

After the run, most sets are picked apart for reusable parts and stored, steel gets recycled, and the rest sadly goes to a dumpster; only our photos and memories remind us of what once was.  This is not that story, yet.  This set was destined for another purpose thanks to a very timely event: Penumbra Theatre at 40: Art, Race and a Nation on Stage, an exhibit at the Minnesota History Center Feb- July 2017.

The Penumbra at 40 exhibit provides a behind-the-scenes look at the founding and history of the nation’s largest and preeminent African American theater. Along with original scripts, props, and costumes, the highlight of the exhibit is the Fences set! 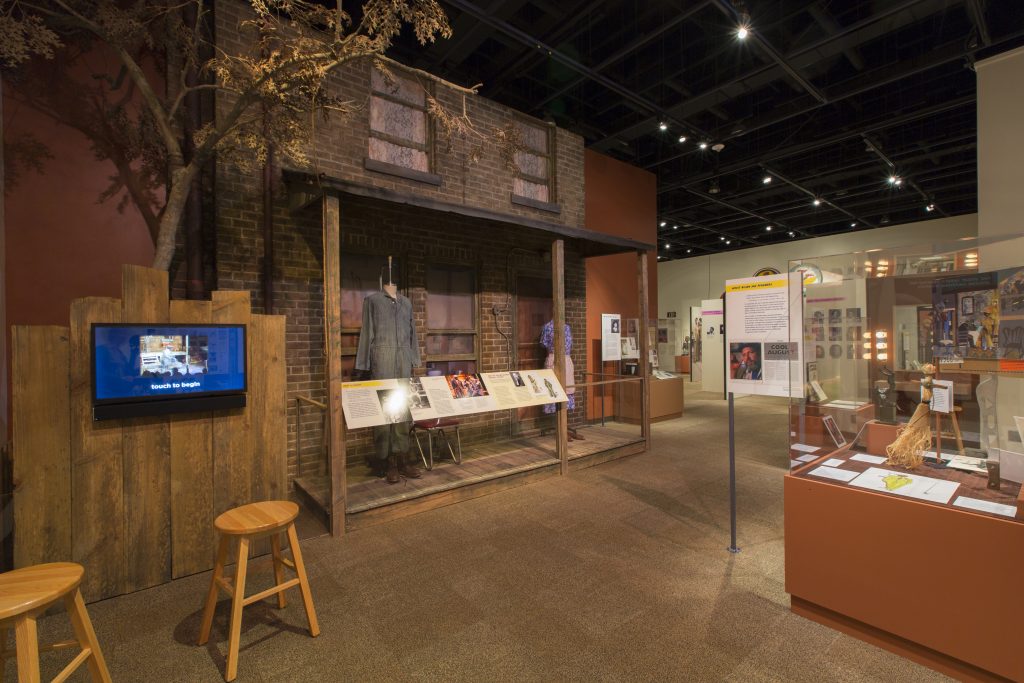 “When we started working on the exhibit, Lou Bellamy told us of a production of Fences that was currently touring, and suggested we get the set to use in the exhibit. This was a terrific opportunity. Including a real piece of scenery in the gallery gives visitors a close-up of something they would normally only view from afar.” Kate Roberts PhD, Senior Exhibit Developer.

The set created a dramatic focus in the exhibit, and a strong anchor for the section on the playwright, August Wilson.  It helped provide the perfect backdrop for displaying costumes and sketches by costume designer Matthew J. LeFebvre, along with the sketches and a set model by scenic designer Vicki Smith.

So how does one take a set and move it into a museum’s gallery? With lots of planning. The exhibit designer, Sarah Brandner, and two members of the production department went to Milwaukee to see the final show of the tour, document the set, and work with the strike crew to prep set pieces used in the exhibit. They hired a local fabrication company, Art Tech, to modify the set (which needed to be cut down to fit in the gallery). This is where I come in: they hired me as the Scenic Artist to touch up the set, and paint new elements added for the display. I have been the Charge Artist for Penumbra for the last 9 years and was eager to add my skills to this project.

The hardest part about walking into a touch-up call on a set you didn’t paint is just that – you didn’t paint it. Knowing what colors of paint and tools to bring can be a challenge.  Thankfully I had read a great article about how the set was made and knew what colors to put in my kit, and what types of techniques to plan for.

The other great advantage I had for this unique touch-up call was the ability to do most of it off-site. Because so much of the set needed to be cut down to fit into the space I was able to come in early, assess the damage to the homosote bricks and pre-paint the “new pieces.”

Once we were at the History Center Museum, Sarah and I debated about “filling and patching” the seams made from having to build the set in sections for touring, as well as the museum install. Not only would it have never matched the original bricks, but having it look like “a set” was seen as an advantage, and so just making the raw material of the broken bricks blend in was a big time saver. 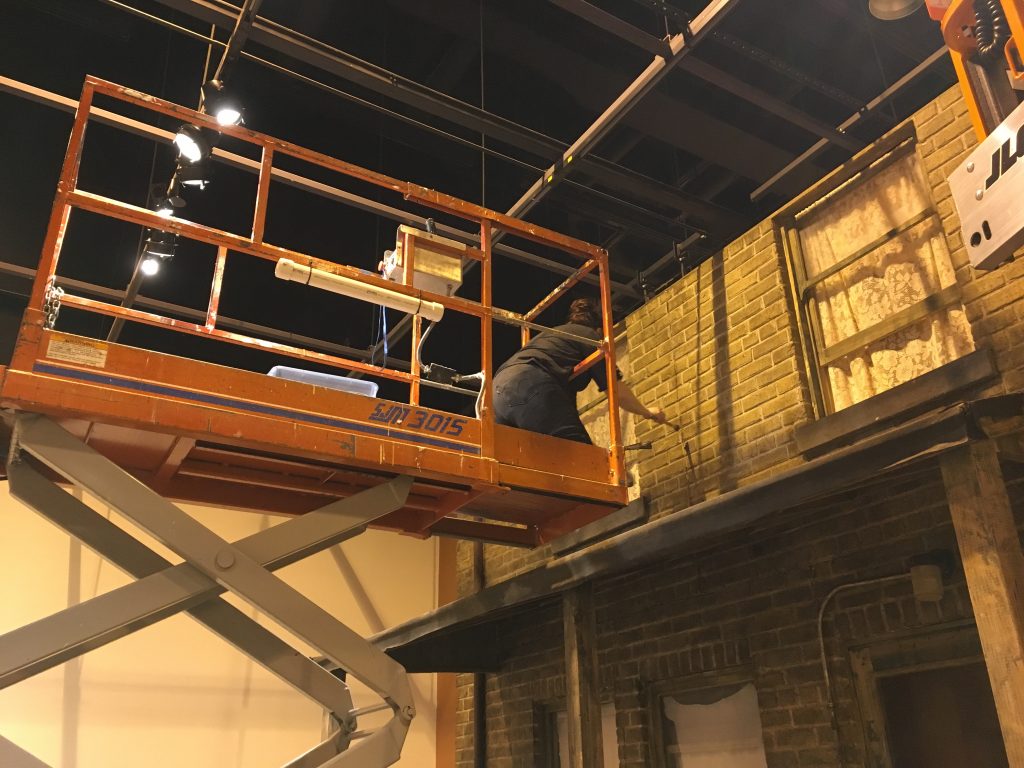 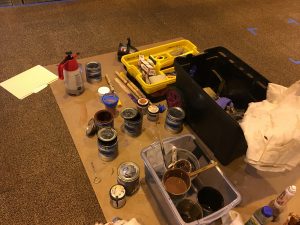 A piece of -Maso made a great work surface.

When I am brought in for touch-up calls, having a well prepared and mobile kit is key. I love my little wheeled tool box with a tray to keep my brushes and small tools separate from the bin that stores my paint and larger tools. Touching up in locations not meant to get dirty also requires an extra layer of protection and masking. I always keep drop cloths and rags in my kit, and if possible find another surface to work on.  When I do have to “walk around” with the paint I will always carry it inside an extra bin or bucket to catch drips, or worse, spills.  I am also a big fan of the Quart Sized Rosco Paints, as I can fit more colors in a small space, and for this set creating thin but vibrant washes was key. Earth Umber washes ended up being the key touch-up color for the bricks, and I used thin washes of Raw Umber to “stain and age” the wood added by the museum to hold plexi barriers on the porch.

The key to this type of touch-up (and all touch-ups, really), is that if I did my job, the museum visitors won’t know I was even there. This is their chance to put into context the history of a great organization, like Penumbra, and get a close-up view of what it takes to create these amazingly real worlds. A view most audiences will never get to see this close up. 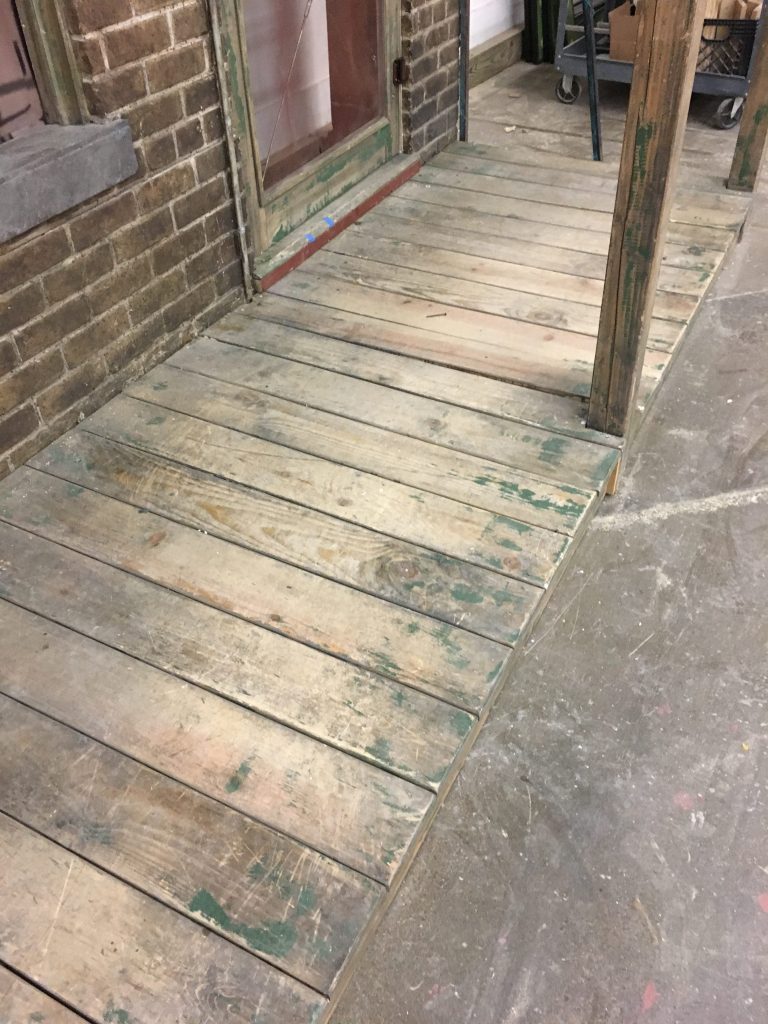 Check out that great level of detail from the original Scenics:  Brigitte Bechtel and Lydia Lopez from Arizona Theatre Company.

Don’t we all wish that our sets traveled to a museum  after a show! 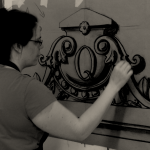 Angelique “Q” Powers has been painting for over 15 years, and has an MFA in Scenic Art from Cal Arts.  Along with being the Charge Artist at Penumbra theatre she also freelances, and works with the University of Minnesota as an Adjunct Lecturer. She is currently most proud of her work as a Founding Board Member of  The Guild of Scenic Artists and her work here on The Scenic Route.